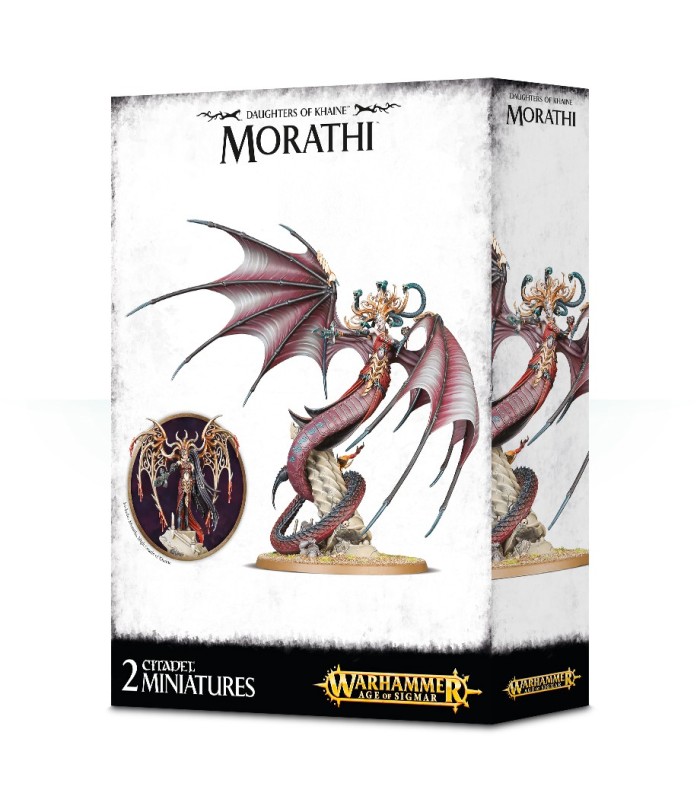 A creature of magic, manipulation and secrets, the High Oracle of Khaine, the Shadow Queen and grand matriarch of the Daughters of Khaine, Morathi is an ancient being, a seeress unmatched in her mastery of dark magics. In addition to being able to summon the horrors of the nightshade-realm, she has used her spells to morph into a comely form – a radiant she-aelf framed by outstretched wings wrought of shadow-metal. So great is her supernatural beauty that foes stand mesmerised by her rapturous allure. This is a fatal mistake, for Morathi wields her spear Heartrender with cruel efficiency, and her bladed pinions are themselves razor-sharp weapons that can easily lop limbs and heads.

This multi-part plastic kit contains the components necessary to assemble Morathi. She comes as 2 different miniatures, both of which are included: the High Oracle of Khaine, her aelven form, and The Shadow Queen, her true, monstrous form. The High Oracle of Khaine is an icily beautiful figure, wearing ornate leather and metal armour. In a gloved hand she holds her magical spear, Heartrender, pointing it toward an unseen enemy. Behind a large, metal headdress, her long, serpentine hair cascades down her back – upon closer inspection, this is laced with wicked barbs and blades. Her wings fan out from her back, dripping with blood from every point.

The Shadow Queen is another prospect entirely – standing almost 3 times taller and posed in a far more aggressive manner, this miniature will make a splendid centrepiece for any Daughters of Khaine collector. In this form, her furious serpentine aspect dominates, with the lower half of her body given over to a long, sinister snake-form which coils and twists around a massive stone column. Her top half wears the same armour, with the same headdress and Heartrender – but her hair has been replaced by snakes, and the wings have become expansive and scaly, with huge chitinous points ready to impale the unwary. The base features an unfortunate aelf, turned to stone and broken in half by Morathi’s gaze.