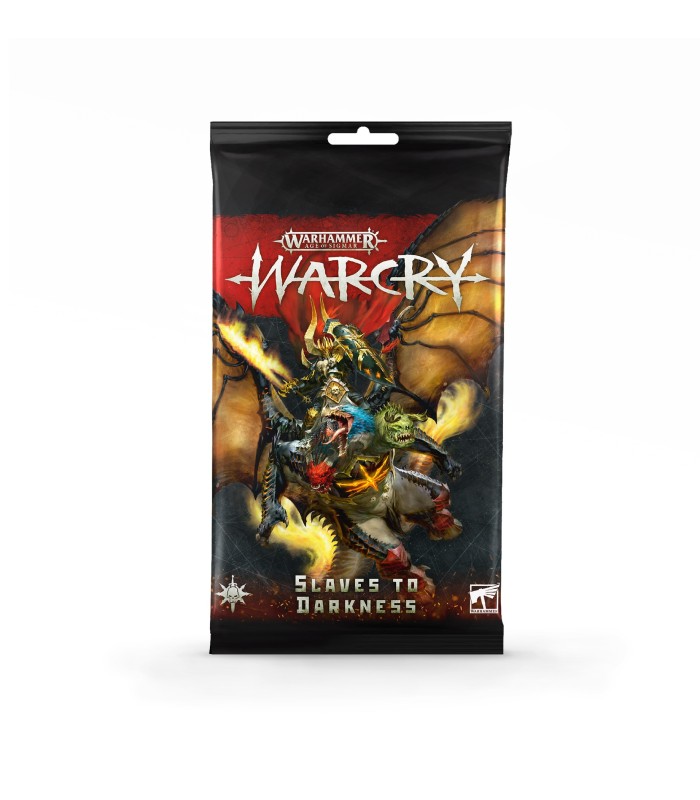 The tribes of the Slaves to Darkness represent the greater part of humanity found in the Mortal Realms. Their champions seek to walk the Path to Glory, the metaphysical road upon which a warrior’s deeds are rewarded with Chaotic boons – the most coveted of which is an eternity of war as a mighty Daemon Prince. The greatest overlords rule hordes of thousands of warriors, but countless smaller warbands exist and seek glory of their own. Across the Bloodwind Spoil, they battle for dominance, honouring the gods with each slaughtered enemy.

Unleash the wrath of the Slaves to Darkness in your games of Warcry with this card pack – containing rules and abilities for your very own warband of heavily armoured bringers of ruin. Made up of a mix of skirmishing Marauders and armoured elites like Chosen, this warband is combine speed and durability with deadly effect.

This set contains:
- A Faction Ability card, allowing you to harness tactics, tricks and abilities unique to this warband, including the runemarks you need to use them. The reverse allows you to identify the fighters in your warband. The set contains a faction abilities card in each of the following languages: English, French, German, Italian, Spanish, Chinese, Japanese, and Russian.
- Fighter cards for 12 fighter types, including Marauders, Marauder Horsemen, Chosen and Chaos Warriors with a variety of weapon and equipment options
- 2x divider cards, used to keep track of any tokens that apply to fighters in games