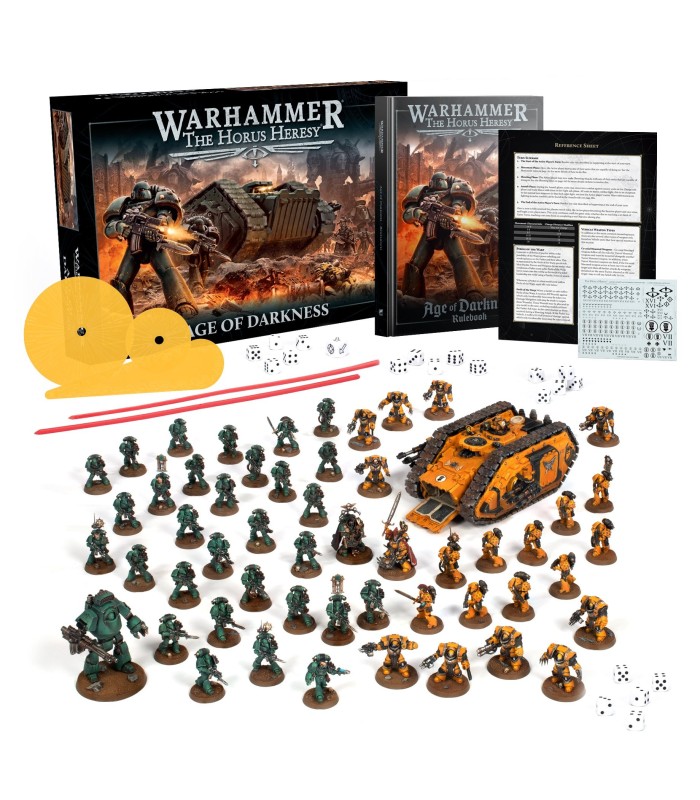 An Age of Darkness has descended upon the galaxy. Horus Lupercal, Warmaster of the Emperor's armies, has turned against his gene-father and sent the Imperium spiralling into bloody civil war. Of the eighteen great Space Marine Legions, finest of all humanity's soldiers, fully half have sided with the traitorous Warmaster, while the remainder stand staunchly loyal to the Emperor. It is a war of brother against brother, Space Marine against Space Marine, which has seen the might of the Imperium's vast armies turned upon itself in a cataclysm of fire and blood.

In Warhammer: The Horus Heresy you will pit mighty armies of superhuman warriors against each other in apocalyptic tabletop battles. Choose your favoured Legion, from the knightly Dark Angels to the duplicitous Alpha Legion, build your own army from a range of spectacular Citadel and Forge World miniatures, and clash with fellow players in wargames of staggering tactical depth. The tale of the Horus Heresy is the bedrock of Warhammer 40,000's rich history, and this boxed game is the perfect first step to joining the epic conflicts that reshaped the galaxy.

The titanic Warhammer: The Horus Heresy – Age of Darkness boxed set contains a treasure trove of content, from a massive rulebook detailing the setting and stories of the Horus Heresy, as well as gorgeous photography and art, and all the core rules you need to play the game. The box also contains 54 Citadel miniatures – including a massive Spartan Assault Tank and a host of MKVI 'Corvus Armour' Tactical Marines – allowing you to build two opposing forces for out-of-the-box play, or construct a huge Legion force all your own. Alongside all of this, you'll get all the game accessories and rules reference materials you need to immerse yourself in the worlds of the Age of Darkness.